Arthur F. Mulligan, 100, of Delray Beach, Fl. formerly of Rosendale and Kingston, passed peacefully Thursday morning, March 24 at the Trustbridge Hospice of Delray Beach, Florida, with his wife & family by his side. He was born in Kingston, NY, and was the son of the late John A. and Estella Mulligan and a graduate from Ravena-Coeymans High School, class of 1932. A veteran of WW II, Pacific Theater of Operations, U.S. Army Air Corps, he served from 1942-1947, attaining the rank of Lieutenant Colonel, he was a pilot of the famous B-24 Liberator with the 43 Bomb Group, 64th Squadron, the "Kens Men". He saw action in New Guinea, Bismarck-Archipelago, South Philippines, Luzon, Eastern Mandates and China flying 102 combat missions. He was awarded the Distinguished Flying Cross w/3 Oak Leaf Clusters; Air Medal w/4 Oak Leaf Clusters; Army Commendation Medal; Asiatic-Pacific Theater Ribbon W/7 Bronze Stars; American Theater Ribbon and the World War II Victory Medal. He served 26 years including active duty and the Reserves. Arthur besides his family, loved driving and flying. As a young man he started his driving career with numerous truck driving jobs before becoming a driver for Adirondack and Pine Hill Trailways. He then became partners with his brother Eugene in The Chalet Restaurant and Bowling Alley and Myers Garage & Taxi in Rosendale. He later established Arthur F. Mulligan Inc. and Arrow Bus Line, retiring in 1992 after 45 years. Art and Bev enjoyed many wonderful flying trips throughout the US and the Caribbean, with airplane partners Ed & Lib DeGroff. It wasn't until much later at age 80 when he rekindled his love of driving, and bought a motor home and traveled throughout the US with his co-pilot Beverlee. Active in civic and fraternal organizations, Arthur served as Trustee, and later Mayor and Police Chief of the Village of Rosendale; member and past Fire Chief of the Rosendale Volunteer Fire Department; Life member of the American Legion Post #1219, Tillson, NY and VFW Post# 4141 Delray Beach, Fl. Former member of; Rondout Valley Lions Club; Board Director- New York School Bus Contractors Association; National School Transportation Association and the American Bus Association. Arthur will be remembered for his work ethic, integrity and dedication to the school bus industry and love of family, community and country. Arthur was a parishioner of Ascension RC Church, Boca Raton, FL. St. Joseph's RC Church, Kingston, NY and St. Peters RC Church, Rosendale, NY. Arthur is survived by his loving wife of 68 years, Beverlee A Schmitz; they wed on October 14, 1947 in Great Falls, Montana; his son Gary Mulligan and wife Sally (Goffredi) of Kingston; daughters Pamela of Delray Beach, FL and Barbara Focht (Gil) of Jacksonville, FL; grandchildren; Colette Dispinseri, Kristina TenEyck, Mark TenEyck, Stephen Salvino Jr. 6 great grandchildren; sister-in-law, Frances Mulligan and many beloved nieces & nephews. He was predeceased by brothers, Eugene, Edward, Bernard, Roger; sisters, Estelle DuJardin and Rosemary Rowe. Entrusted to the care of the Keyser Funeral & Cremation Service, 326 Albany Ave, Kingston, The family will receive their friends on March 31, 2016 from 4 to 7pm. A Mass of Christian Burial will be celebrated at St. Joseph's RC Church, Kingston, NY on April 1, 2016 at 11:00 am. Burial in St. Patrick's Cemetery, Ravena, NY on April 2, 2016 at 11:00 am. The family suggests memorial donations to American Legion Post # 1219, Tillson, NY or the Rosendale Fire Department. 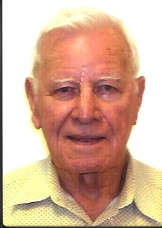